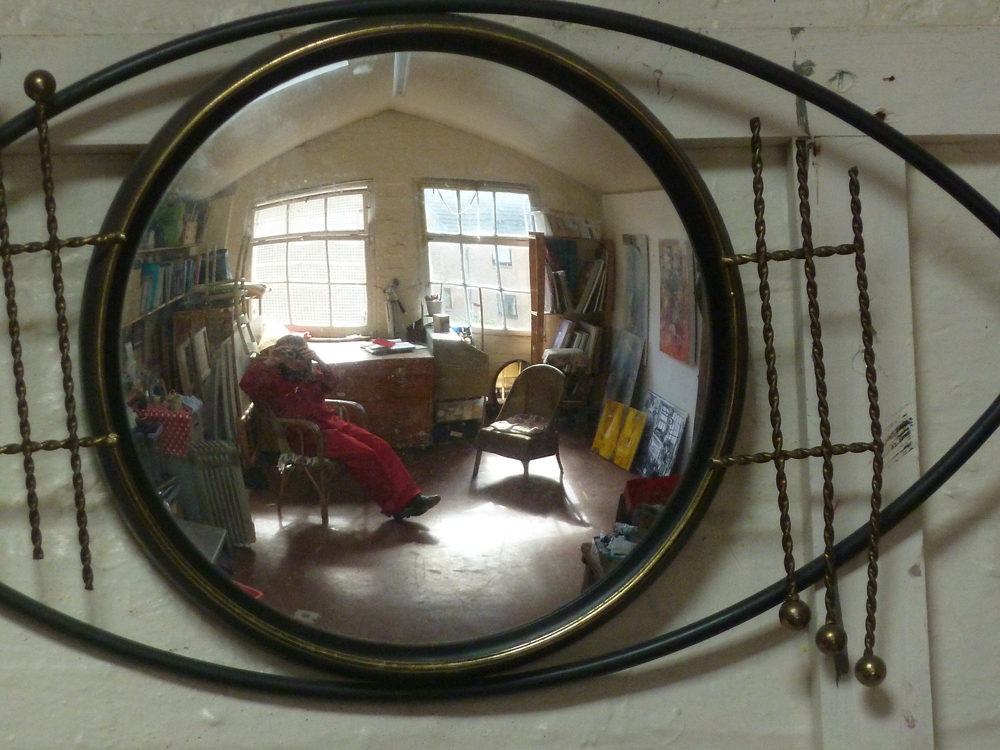 I have been in my WASPS studio for twenty and a half years. I was in the first group of people to take a studio here in October 1995 when the building became available. I was immediately attracted to this studio because of its pitched roof, windows and skylight. It was like a doll’s house.

I love my space and very much see it as my own, although I dare not think of the money I have paid in rent over the years. As the years have passed I have also accumulated a lot of things- and not all of them are paintings. Storage has always been a problem in our building and, more and more, I was having to stash work in my studio. I built a tall, moveable unit to house some of them, thinking that would solve some problems, but it ended up hogging wall space. Last year, when I took up fresco, I created a dedicated fresco corner. This made my diminishing wall space even scarcer.

I found that I was using one small gap of wall to do my painting and felt constrained. I tried moving my storage unit, but wherever it went it took up wall space or cut out light. Maybe I should throw some paintings out!  Then I would be able to cut the unit down to half its height. I was not bold enough to throw out very many works, but decided to get the saw out anyway and reduce the offending structure. This started me on a mission to rearrange my space. I did not know, at the beginning, that it would take me an entire week.

At first, I just tinkered at the edges, moving things within an existing arrangement. It was better, but there was only a bit more wall space and wall space was what I wanted. I thought of putting deeper shelves up in my fresco corner to get things off the ground and take shelves down on the other side to make painting space.  So rigid I was in my set up that it took me a while to see that I should simply move my fresco corner over to where there were already deep shelves and free up wall space on the other side. Twenty years with my oil paint boxes on one side of the studio had set me in my ways.

The freedom to change the position of previously fixed things was a revelation. Once I had had this radical thought there was no stopping me. I became inspired.  Thus started a further six days of rearranging.  There is no room outside my studio to put anything temporarily, so I had to move things around other things. It was like one of those puzzles made out of little squares where you have to make an ordered picture out of a chaotic arrangement with only one small space to manoeuvre in. Every time I wanted to move something I had to move something else, previously moved, to make room for its passage- and some of these things were very large and very heavy. I was stepping over chairs, crawling under tables, kicking bags out of the way, tottering on uneven piles of wood. I can’t count the number of times I moved a particular pile of canvases. In the end, it made logical sense to write down an order of things to be moved, which necessitated a lot of thinking backwards. This worked to a certain extent, until I changed my mind about things, sometimes very heavy things. It was often not until something was in place that I saw it would be better elsewhere. 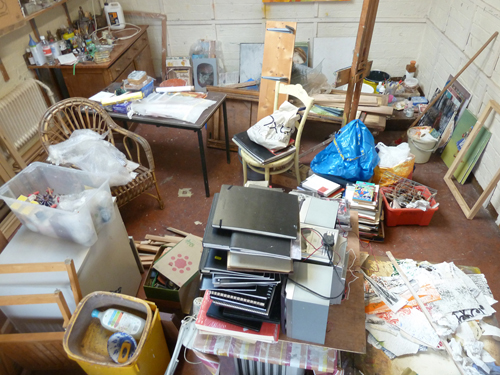 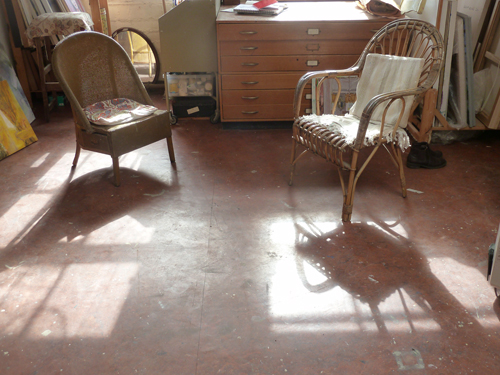 As the days went by I could see the end in sight. The last thing I did was put a third coat of white paint on a previously brown wall. Then, there it was-  my new studio! I could do little other than sit and grin and the vastness of it. I had reclaimed three and a half times my previous working wall space. I had cleared window space to bring back a bit of the doll’s house element that first attracted me to the studio. The offending unit found an out of the way space which was made possible my moving my plan chest and its entire contents one centimetre to the left.

I don’t think I would have embarked on the studio rearrangement if I had known it would take a week. Then, I would still be working in my cramped conditions feeling frustrated. I hadn’t realised just how much that had been getting me down. Clear physical space creates clear mental space. Now, watch this space.