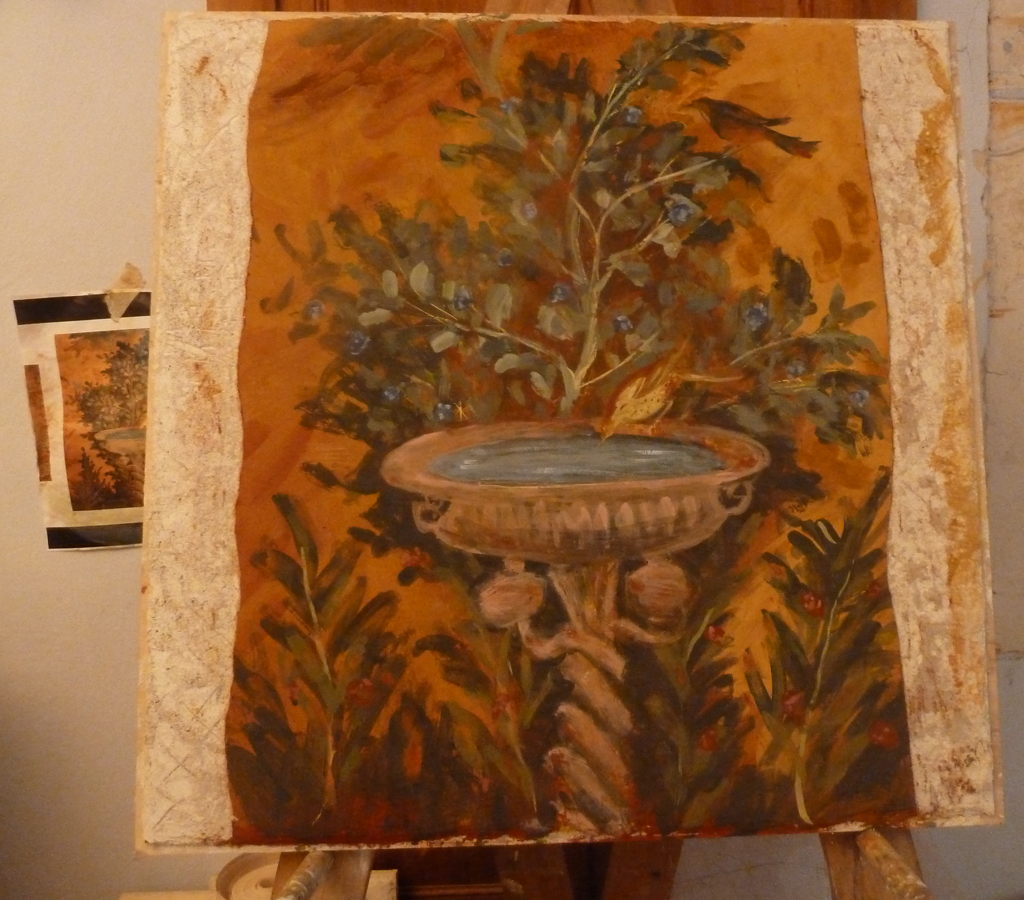 I have recently returned from a wonderful week in Bosa, Sardinia. I attended a fresco painting course led by Carey Mortimer. I have been interested in the technique of buon fresco for about 10 years. Having tried various experiments in my studio, I felt it was time for some technical guidance.

Carey started us off mixing the lime putty and sand and applying it to a dampened tile. I had done this before, so was happy to be quite free with my marks. Traditionally, a detailed cartoon was transferred to the damp plaster surface by pouncing or incising. It is also possible to be quite spontaneous with your marks.

I really wanted to tackle painting on a wall. I had a bit of practice plastering a bared patch of wall, but it was more practical to work on a large panel. This was 90cm square and had already been prepared with a coat of plaster. Having never worked with fresco on anything so large before, I decided I would learn what I wanted by making a copy of a traditional fresco. Carey had a lot of books in her library and I was inspired to make my version of a part of the design in Livia’s garden in Pompeii. 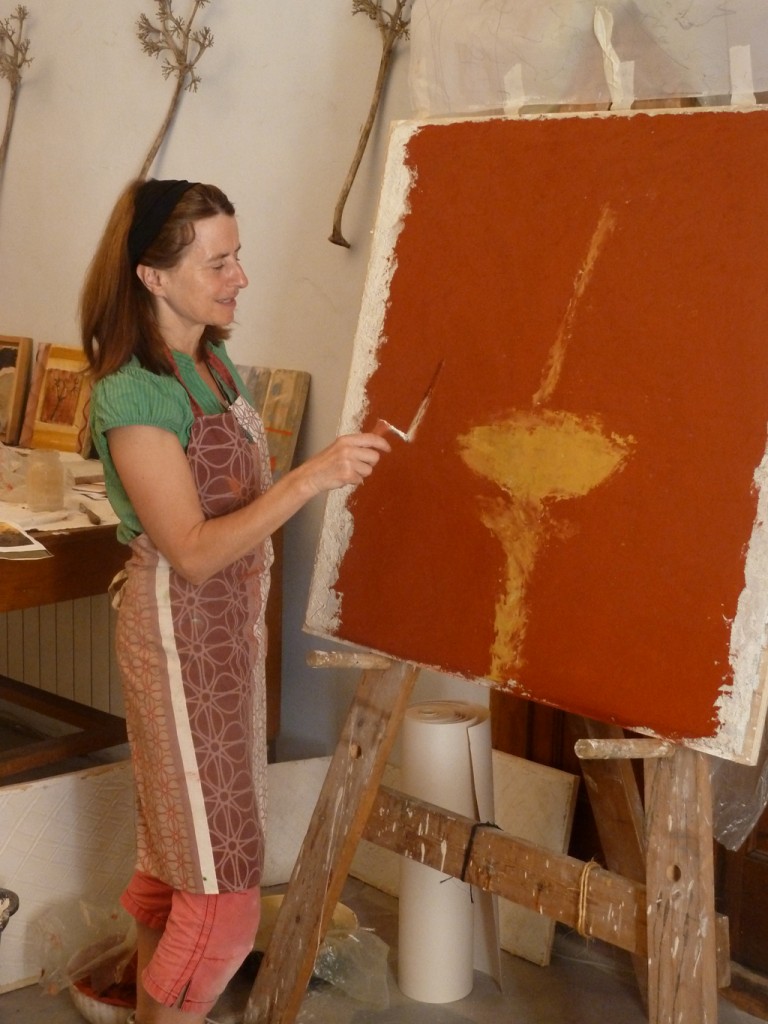 I studied the photographed image intently and worked out my plan of attack. After applying the second coat of plaster and letting it dry, I mixed red earth pigment with the top coat of plaster- in effect, a red underpainting. On top of this, I applied washed of yellow ochre. Then I incised the main lines of the composition onto the surface. I decided to leave plenty of room for spontaneity, as that was the spirit in which the original fresco was done. Using a large fresco brush, I made a mixture of calligraphic and broad marks, being careful not to overwork areas. I had premixed all my pigments the night before and they were all lined up waiting for me. I was enjoying this combination of careful planning and freedom. I knew I had to complete the painting in one day as, once the plaster is dry, it will no longer accept paint. However, Carey invited us all to her place in the country for lunch that day. What should I do- paint or eat lunch? With the aid of some polythene, I managed to do both, by covering the panel to stop the air drying it out.

I wanted to practice joining sections- these are called giornatas, so I left the two sides of the painting till the next day. I think my joins were rather clumsy, but they were disguised by the edges of some invented curtains.

There was also time during the week to paint some small frescoes on tiles or hessian covered panels. Carey showed us how to do sgraffito- scratching through limewash onto dark or coloured plaster. She also showed us a technique she called Stucco Lucido, which involved mixing a wax emulsion into the pigment and then polishing it. Finally, she demonstrated how to apply and emboss gold leaf to frescoes. 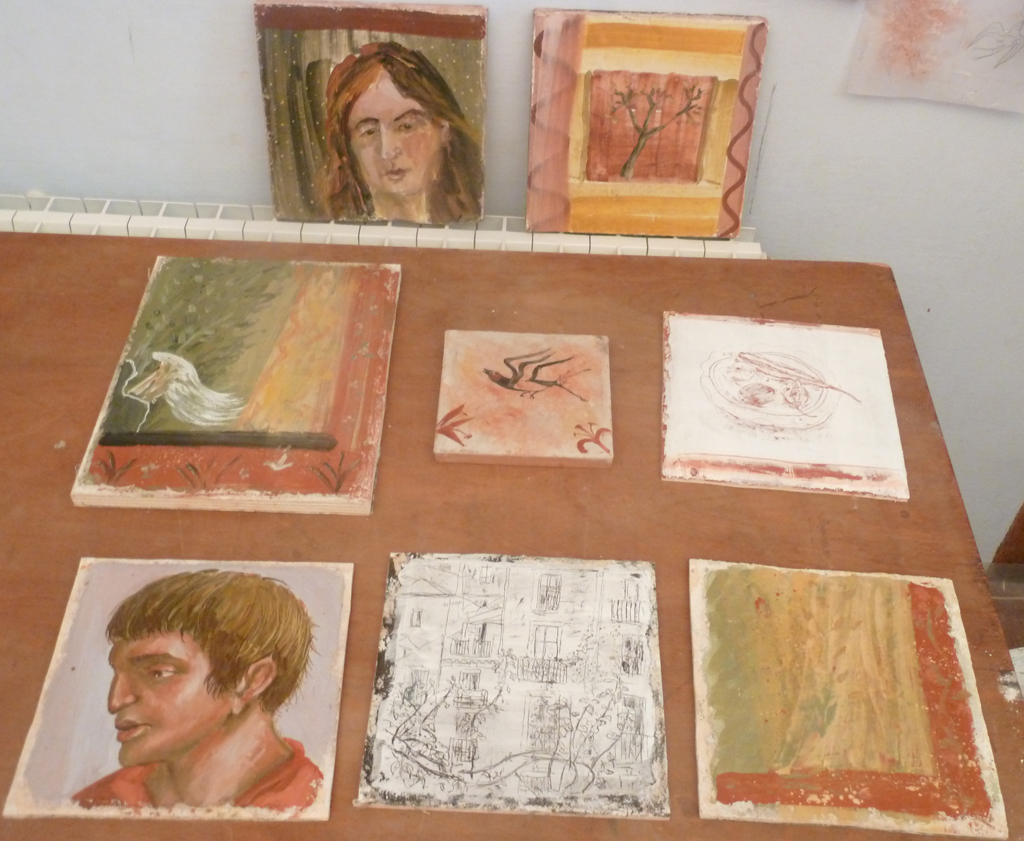