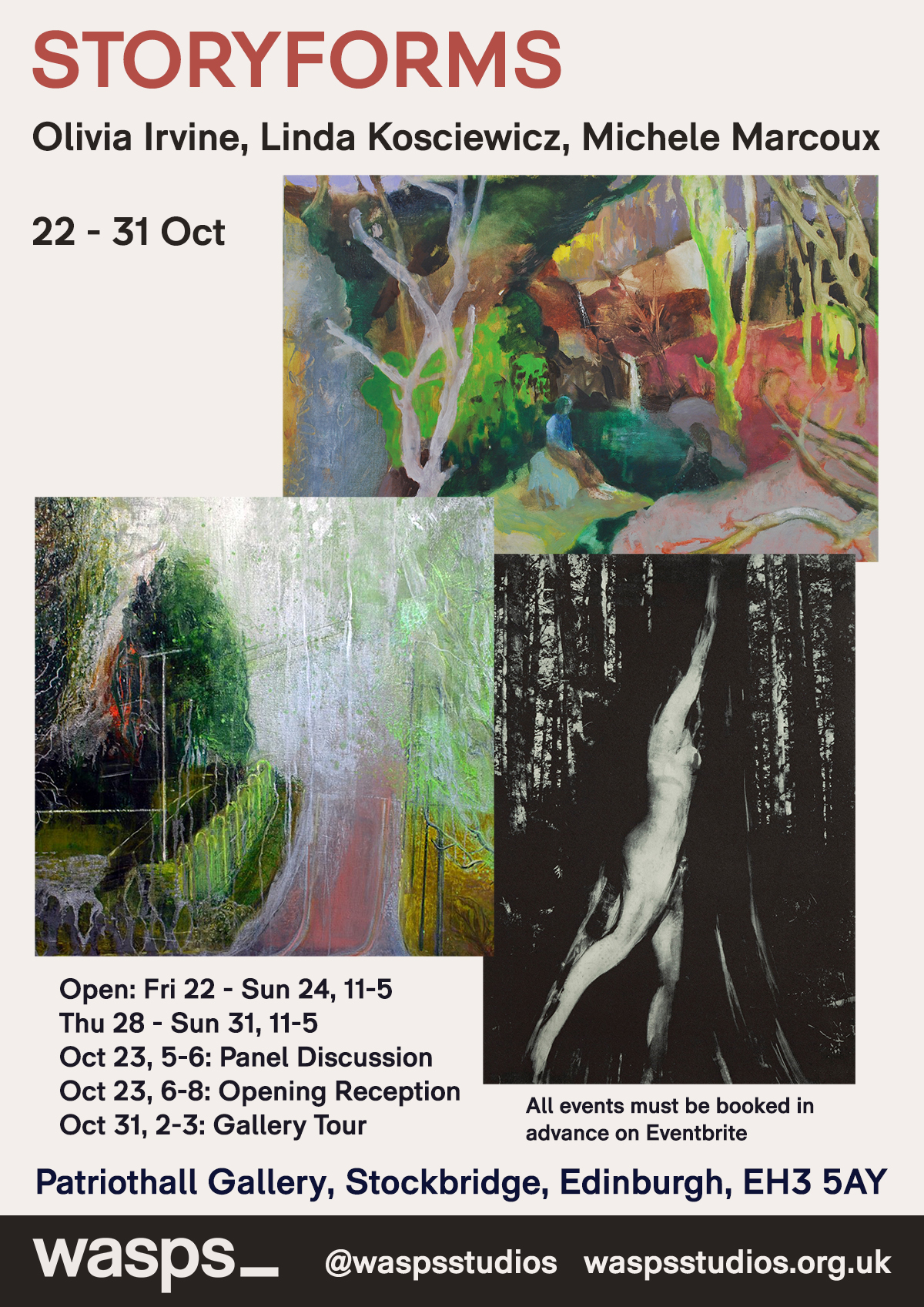 When does form become story? How does a story reveal its forms? Three artists Olivia Irvine, Linda Kosciewicz and Michele Marcoux present an installation of new work – painting, drawing, printmaking & video – to consider how artists create this alchemy. Visual ideas of inside/outside, light/shadow, abstraction/figuration will bring together ancient stories with modern ones, observations from nature with dark imaginings.

Olivia Irvine – Olivia Irvine was born in Kilwinning. She attended Edinburgh College of Art where she gained a BA Honours in Drawing and Painting and a Diploma in Postgraduate Studies. This was followed by a year in Madrid on a Spanish Government Scholarship and an MA in European Fine Art at Winchester School of Art in Barcelona. She has recently done two residencies – one with NHS Tonic Arts and one with Merz in Sanquhar which was part funded by a VACMA grant. Based in Edinburgh, she is currently researching and developing paintings on the theme of family, funded by a Creative Scotland bursary.

Linda Kosciewicz – Linda studied drawing and painting at Duncan of Jordanstone College of Art, Dundee, followed by an Ma in Conservation of Fine Art. She has exhibited widely in the UK, Europe and Malaysia. In 2011 she was a finalist in the International Photography Open Salon, Arles, France and in 2012 she won the the Pauline Fay Lazarus prize for her work based on the human body and in 2010 and 2012, she received Visual Arts Awards from Fife Council and has also worked with scientists from Edinburgh University on a project exploring ageing, movement and the human body. Her work encompasses photography and performance, printmaking, sound and mixed media.

Michele Marcoux – Michele grew up in Ohio in the USA living in New York City before moving to Scotland in the 1990’s. She got her BA in Fine Art at Bennington College and the University of Pennsylvania in the USA and a Master of Letters Fine Art Practice at Glasgow School of Art in 2016. In April 2021 she attended a residency at MERZ gallery in Sanquhar supported through the Creative Scotland Open Fund. Michele is currently developing work for Ecologies of Displacement a collaborative residency with Pakistani artist Farrukh Adnan that is a partnership between Koel Gallery in Karachi, Pakistan and Summerhall in Edinburgh that is funded by the British Council and Creative Scotland. Exhibitions are planned for Koel Gallery, Karachi in Jan 2022 and at Summerhall in August 2022.